Back to all posts

The in November recorded album 'Christmas Carols' in collaboration with Rineke de Wit (Oboe & Soprano) and Dennis de Bruijn (Grand Piano) is as of today available on all major music streaming platforms.

The album features 10 of the most well-known Christmas Carols, originating from England, Germany, Poland, Czechia, Austria, Italy & America. For all album information, lyrics of the pieces, to purchase, download and stream the music, click here.

Adeste Fideles / O Come, All Ye Faithful
It's one of the most traditional and well known Christmas Carols, but I couldn't think of a better piece to start with on this album. The wonderful intro played by Rineke de Wit & Dennis de Bruijn on Oboe & Piano only confirmed it was good thinking! Widely known as 'O come, all ye faithful', this Christmas song was originally (in the year 1744) written in Latin as 'Adeste fideles'. Therefore you will hear the first verse in Latin, and the second verse in English.

O Du Fröhliche
This German Christmas Carol was written about 200 years ago. The original text was written by Johannes Daniel Falk, on the already existing (and therefore even older) anonymous melody 'O Sanctissima'. Apparently Falk didn't finish the piece, which was completed by Heinrich Holzschuher. To give the non-German-speaking-listeners (is this a actually a word?) an idea what this piece is about, here the modern English version of the first line: 'Oh, how joyfully; oh, how merrily'. Listen how magnificant the intro is on the Piano, played by Dennis de Bruijn, who captures and expresses the joyful spirit of the Carol so well!

Leise Rieselt der Schnee
This German traditional Christmas Carol might very well be the most well known German Carol there is. It was composed in 1895 in Graudenz (Poland) by the Protestant pastor Eduard Ebel, and this song is still often performed on Christmas concerts. Enjoy this version, where the Oboe part has an almost equal role next to the vocal part!

Joy to the World
This very well known English Carol doesn't need an introduction at all. Firmly played and sung, there is not much to say about it; just enjoy the music!

O Tannenbaum / O Christmas Tree
For many people Christmas isn't complete without a proper, decorated tree. For me the same and for quite some years I have been putting up a tree myself. As the Christmas tree is such a favourite, the famous song about it had be on this album! Originally written in German, millions of people all over the world still enjoy this more then 200 years old song about the 'evergreen' tree. Accompanied by Piano and Oboe the first 2 verses are sung in German, the last verse in English. Don't forget to close your eyes whilst enjoying the music, and who knows: You just might every now and then hear a tree, creaking in the wind...

Kommet, Ihr Hirten
This German Christmas Carol originates from Bohemia (nowadays Czechia). It is another one of those beautiful early 19th century Carols and one can't anything but love it. The still very popular Christmas song invites shepherds, men and women to the stable in Bethlehem, to see and celebrate the new-born Child. The introduction is played by the Oboe and Piano in a lively, spirited manner and the verses follow in the same way: In fact the music doesn't stop until the final phrase for a strong: 'Ehre sei Gott!' (English: Glory to God!).

Tu Scendi Dalle Stelle
Whether we are talking about food, architecture, or music, you'll be able to find some real art in Italy; and when it comes to Christmas music, this Italian Christmas Carol is no exception to this rule! Written in 1732 by (the Neapolitan priest and philosopher) Saint Alphonsus Liguori, it's an absolute treasure amongst the Christmas Carols and I hope you will have as much joy listening to it as I had singing it. Beautifully accompanied on the Piano by Dennis de Bruijn, and instead of playing the Oboe, the multi-talented Rineke de Wit lend her voice for a duet here!

Stille Nacht / Silent Night
Composed in 1818 by Austrian composer Franz Xaver Gruber, this is without doubt one of the most popular Christmas Carols. Translated into many languages, it is sung and played all over the world. For this performance I made the choice of singing the first verse in German (the original language of the piece), and the second verse in English. Even though there are countless versions and performances around, I hope you will enjoy this version of 'Stille Nacht/Silent Night'; which we tried to keep small and tender...

Vom Himmel Hoch, O Englein, Kommt
This German Carol is the oldest piece in the repertoire of this album; dating back as far as 1622! It was originally written in Latin (Puer natus in Bethlehem) and the repeated parts (Eia, Susani & Alleluja) were kept in tact as in the Latin version. I made a small change in the 'Susani' section by singing 'Susani, Susani, Su, Su, Su', as in the original Latin version, instead of 'Susani, Susani, Susani' which is how it's performed nowadays. The literal translation of the piece is 'From Heaven on high, O angels, come'; a song about inviting angels from heaven to play and sing cradle songs for the child Jesus. Needless to say I needed an angelic voice, so Rineke de Wit lend her Soprano voice once more and it worked out wonderfully well! Delicately accompanied on the Piano by Dennis de Bruijn, this piece became the most intimate song of this album and ended up as my favourite.

Jingle Bells
It doesn't need an introduction, yet I will write a few words about this American Christmas song. Originally published under the title 'One horse open sleigh', this 163 years old song is commonly known as 'Jingle Bells'. I don't prefer either of these two titles: the person in the song is 'dashing through the snow, laughing, having fun' and: 'singing a sleighing song' and here we find in my opinion the perfect title: 'A sleighing song'.... It's probably a detail of no matter, but it might reflect what my take is on this song in this rendition. Anyway, as most of us know it as 'Jingle Bells, I simply went for it. And why this song remains so hugely popular? Perhaps the idea of (worry-free!) 'dashing through the snow in a one-horse open sleigh' captures us all... it's definitely on my bucket list!

For all album information, lyrics of the pieces, to purchase, download and stream the music, click here. 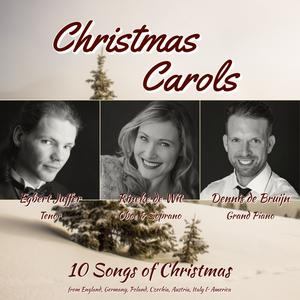